So When is a Good Time to Start Protecting Yourself? 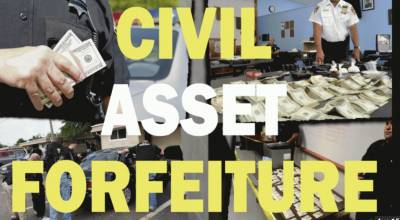 So let's say you're thinking of installing a complete home security system.  When would be the best time to do that?  Should you wait for a 'clear signal' like AFTER a burglar enters your home, completely ransacks it, threatens the lives of your family and then takes everything of value?  Would that be the 'signal' you're waiting for to then go ahead and take precautionary measures?

Or maybe you should wait and keep doing business as usual with all your savings and cash flow sitting in the bank because 'it's safe there and nobody, especially the IRS or the government would ever think of transgressing the lines of morality because "they would never do that'!"

If this is your thinking all I can say is: 'Wake up Fool!  You got some learnin' to do!"

The coffers of the Federal government's asset forfeiture fund are bulging.

"Over the past 30 years, this fund has ballooned 1,600%, from $93.7 million in deposits in 1986 to $1.6 billion last year.  But many of the owners who’ve had their property confiscated by the feds aren’t convicted criminals... they’re innocent people never even charged with a crime, much less convicted of one. A whopping 87% of DOJ forfeiture cases involve civil, not criminal, forfeiture — meaning no conviction is required. Under U.S. Attorney General Jeff Sessions, the Trump administration has doubled-down on this controversial practice.

Police and prosecutors like civil forfeiture because their departments often get to keep most, if not all, of the forfeiture proceeds. As Pete Connelly, a former city attorney in New Mexico bluntly described it, civil forfeiture is a “gold mine” that lets the government take “little goodies.” Even worse, in adoptive forfeiture cases, agencies can bypass state protections for innocent property owners.

Civil forfeiture can be — quite literally — highway robbery. Musician and entrepreneur Phil Parhamovich found that first-hand when he was pulled over by the Wyoming Highway Patrol last year and ticketed $25 for improperly wearing his seatbelt. During the traffic stop, troopers found $91,800 in cash. Suspicious, they seized the money but never charged Parhamovich with a serious crime. Parhamovich wanted to use his cash to purchase a legendary Madison, Wisc., music studio where Nirvana and the Smashing Pumpkins had once recorded. In the months after his highway robbery, Wyoming refused to return the money to Parhamovich. In fact, they even held a hearing about his funds before they notified him of the hearing date. The Institute for Justice (IJ) sued the state of Wyoming on Parhamovich's behalf. Justice was so swift it could have been pulled over for speeding: Mere hours after IJ filed the lawsuit, a Wyoming judge ordered the state to return the money to Parhamovich, which the state flatly refused to do until he sued." -  USA Today March 13, 2018

Along these lines, the IRS no longer needs any proof that you owe them anything.  If they have you on the radar and want your money, they just walk into your bank, flash some bogus paperwork to the bank manager and he turns over the keys to your account without discussion or verification of any type of real due process.

We've had people coming to us to protect their assets from vindictive, irrational spouses.  One in particular just recently joined explaining that she worked her whole life and her freeloading money-grubbing husband started getting nasty when she tightened up the purse strings to act in her own defense.

Often the attacks come from someone who we suspect is the least likely to hurt us, and then they do.  People change, sad to say.  Morality is not much of a factor anymore.  Doing 'what's right' or 'mutually beneficial' is not something that enters the minds of many of the people we love and trust.  It's just a fact of life.

For these reasons and more, the Lighthouse Law Club has created the Global Entrepreneur membership which includes a virtually impenetrable trust as an asset holding vehicle.  No prosecutor, highway robber, judge, ex-spouse or other predators could touch any assets held in this system for a variety of reasons.

Aside from safety and security, you'd also have the opportunity to minimize your exposure to the pressures of inflation and devaluation of fiat currencies and fiat denominated assets.

Liens and garnishments would be impossible.

Lawsuits would accomplish nothing.

Court orders would have the equivalent impact as pissing in the wind!

So the question comes down to 'When would be the best time to take precautionary measures?'

Only you can answer that.

For more info on this subject see the following links;